In this World Cup 2019, Pakistan vs West Indies: Pakistan came up with a horror show with the bat in their opening match as West Indies pacers shot them out for 105 at Trent Bridge in Nottingham on this Friday. 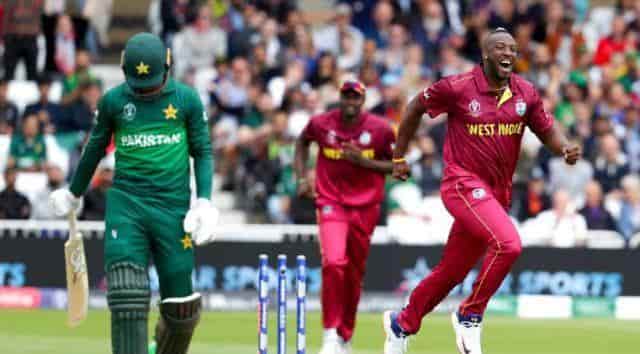 Pakistan was blown away in Nottingham. It seemed to be like Pakistan's batsmen didn't turn up for their World Cup 2019 opener against  West Indies at Trent Bridge as they were just bowled out for 105. 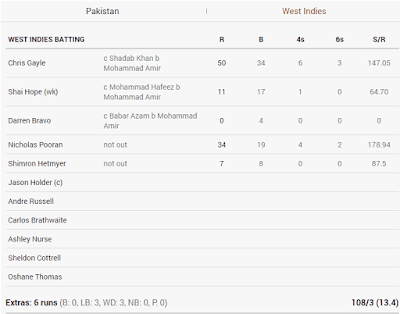 On Friday, Pakistan seemingly lacked the intent and the flamboyance that has been touted to dominate the ongoing World Cup on flat pitches in England and Wales.


In this game, The former champions lost both their openers and Haris Sohail inside the first 10 overs. West Indies all-rounder Andre Russell, who was introduced into the attack as early as the sixth over, showed his teammates the way forward against Pakistan bowlers by bowling fast and short.

Bouncers troubled Pakistan through this innings and none of them also including senior batsmen Sarfaraz Ahmed and Mohammad Hafeez, They found answers to the barrage of short balls that came on their way.

During this match Babar Azam and Fakhar Zaman scored 22 each but none of the others managed to impress. Pakistan managed to past the 100-run mark, thanks to tail-ender Wahab Riaz's late blitz (11-ball 18 that included 2 sixes).

Young and raw bowler Oshane Thomas was the star of West Indies bowling as he picked up 4 wickets in just 5.4 overs During this match. Andre Russell was shone with only two wickets while the captain Jason Holder picked up 3, including 2 wickets in a span of 6 balls.

Pakistan fans have certainly not impressed with the national team's batting display During this match the the biggest stage in world cricket.